Hyperpigmentation is one of the issues that many of my clients are concerned with. Despite being most frequently associated with age and sun spots, hyperpigmentation encompasses a very wide variety of condition from birthmarks to acne scarring.

There are many different forms of hyperpigmentation. Even though all of them involves the over-production of skin pigment, their causes are not always the same. Let’s start by looking at why hyperpigmentation occurs.

How we get our skin colour

We all have colour in our skin that exist in varying intensities from fair to dark. Our natural skin pigment is called melanin, which acts as a natural sunscreen, protecting us from UV radiation. This is why fair-skinned individuals are more prone to sunburns, as they have less melanin protecting them from the sun. Melanin is produced in pigment-producing cells called melanocytes that live in the bottom (basal) layer of our epidermis, just before the dermis. The melanin then gets transferred to the neighbouring skin cells (keratinocytes). 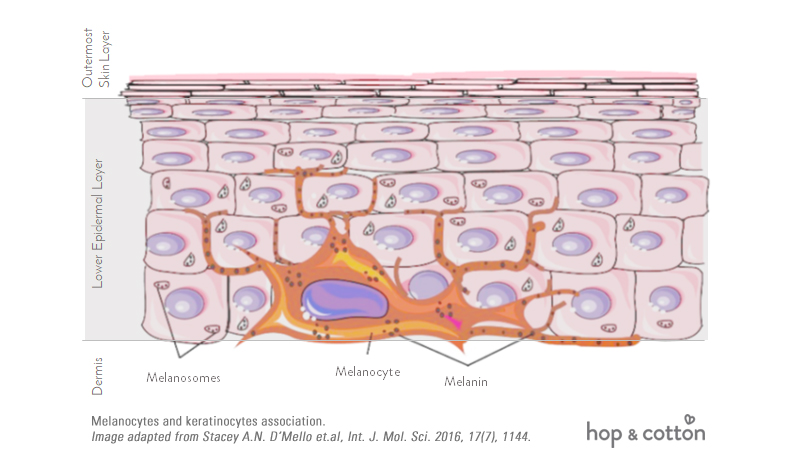 Hyperpigmentation occurs when melanocytes produce excess melanin in response to various triggers. These triggers include

Below describes the five most common types of hyperpigmentation that people are concerned about. These descriptions are not intended for self-diagnosis; please see your dermatologist for an accurate diagnosis.

Cause: Genetic (common in fair skins), exacerbated by sun exposure

Cause: Multiple factors including genetics, sun exposure and hormonal changes. Most prominent in Asian, Hispanic and Middle Eastern female descendant.

Cause: Trauma, most commonly acne or over-aggressive skin treatments

Appearance: Spots or patches prominently on both cheeks; often mistaken as freckles, solar lentigines or melasma

Cause: Genetic (form of melanocytosis); commonly appearing in 20s-30s in Asian female

Identifying the different forms of hyperpigmentation helps us understand why they appear and subsequently the best approach to diminish them. The most common treatment is using skin care products with skin lightening actives. What are the most effective lightening actives? Check back soon to find out more!

Any cookies that may not be particularly necessary for the website to function and is used specifically to collect user personal data via analytics, ads, other embedded contents are termed as non-necessary cookies. It is mandatory to procure user consent prior to running these cookies on your website.