Hyperpigmentation is one of the most common skin concerns across all ages and ethnicities. As a result, skin lightening or brightening products have become extremely popular.

How do we know which ones will work? The proof is in the pudding, or in our case, ingredients. Let’s first understand how pigment is formed in our skin, before we look at some of the best-studied lightening actives and how they work to diminish hyperpigmentation.

Melanin production (melanogenesis) can be triggered by several factors, with UV exposure as the most common one. This initial trigger then signals a series of reactions, resulting in melanin production in the pigment-producing cells (melanocytes).

In the presence of a trigger, an enzyme called tyrosinase gets activated, initiating the melanin synthesis pathway. Subsequently a series of oxidative reactions (i.e reactions that require the presence of oxygen) occur, until melanin is formed in the base layer of our epidermis. Melanin gets transferred from the melanocytes to neighbouring skin cells (keratinocytes), and can sit in varying depths of the epidermis from the basal layer to the outermost layer. 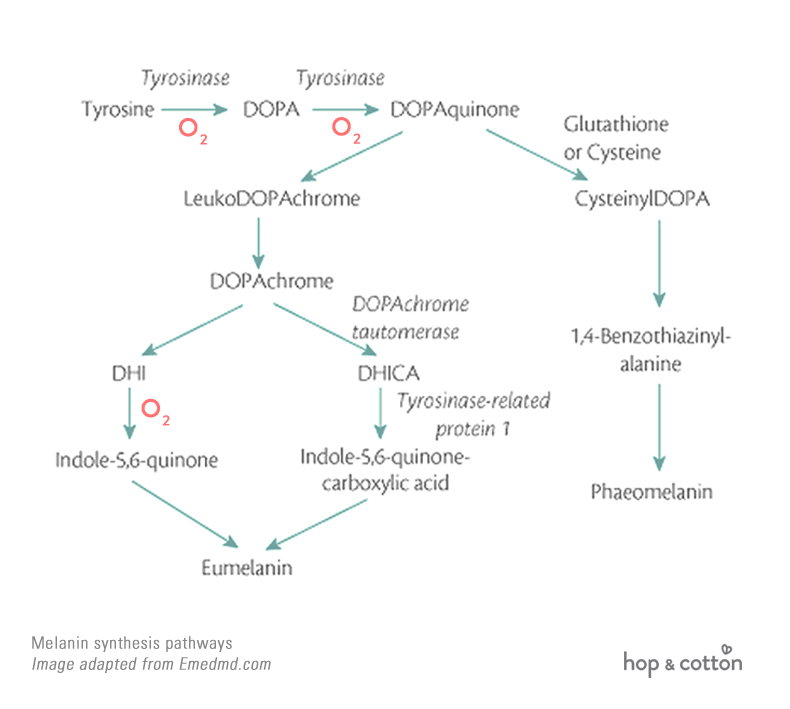 Tyrosinase initiates the melanin synthesis pathway converting tyrosine to 2 types of melanin (eumelanin and phaeomelanin), through a series of oxidative reactions (indicated in red). Combinations of both types of melanin result in varying proportions result in a vast variety of skin/hair colour. UV exposure increases melanin production, particularly eumelanin. 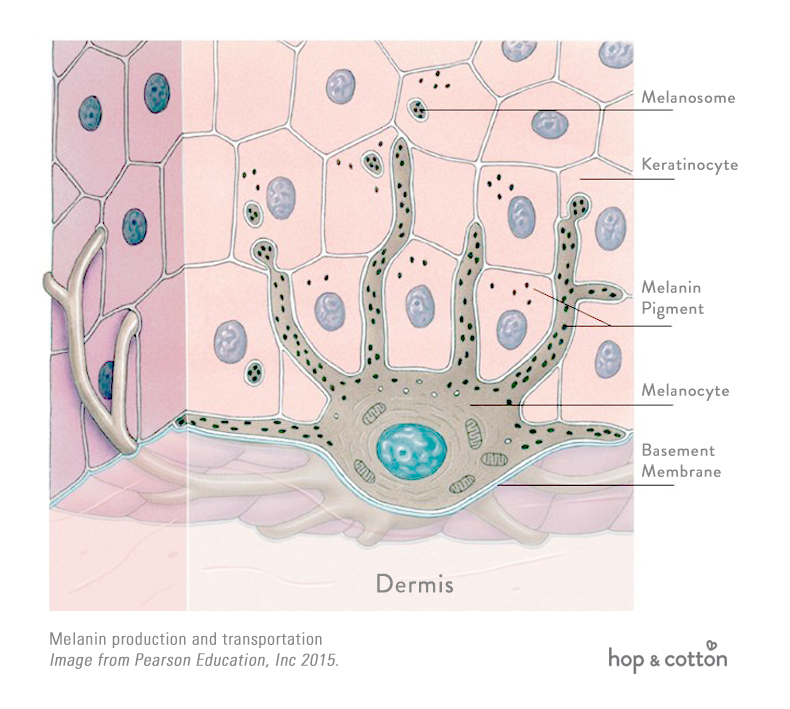 Melanocytes sit at the lowest layer of epidermis (basement membrane). They manufacture melanin and pack them into structures called melanosomes. The melanosomes then get transported to neighbouring keratinocytes and continues upwards.

Routes of action for pigment reduction

Melanin production is a complex, multi-stepped process. For any ingredient to diminish hyperpigmentation, it must disrupt melanogenesis in one of the three ways listed below.

Tyrosinase is the most important enzyme that starts off the melanin synthesis pathway. Antioxidants (e.g. Vitamin C) fall under this category as they prohibit the various oxidative processes that occur in melanogenesis.

After melanin is produced, it is transported from the melanocytes to neighbouring keratinocytes, and continues upwards until it reaches our outermost skin layer. Preventing melanin transfer stops melanin from becoming visible.

Hyperpigmentation can be removed by removing the outermost skin cells that contain melanin. These ingredients speed up skin shedding (desquamation) or regeneration (differentiation).

To date, hydroquinone is still considered the ‘gold standard’ (i.e. most potent) for skin lightening, but is controversial due to its ability to also destruct melanocytes permanently and cause other irreversible unwanted effects with prolonged usage. For this reason, safer (albeit generally less effective) alternatives have been and are continually being developed in laboratories all over the world.

Below is an exhaustive list of lightening actives with proven efficacies. Some have a longer history of use and/or are more extensively researched than others. 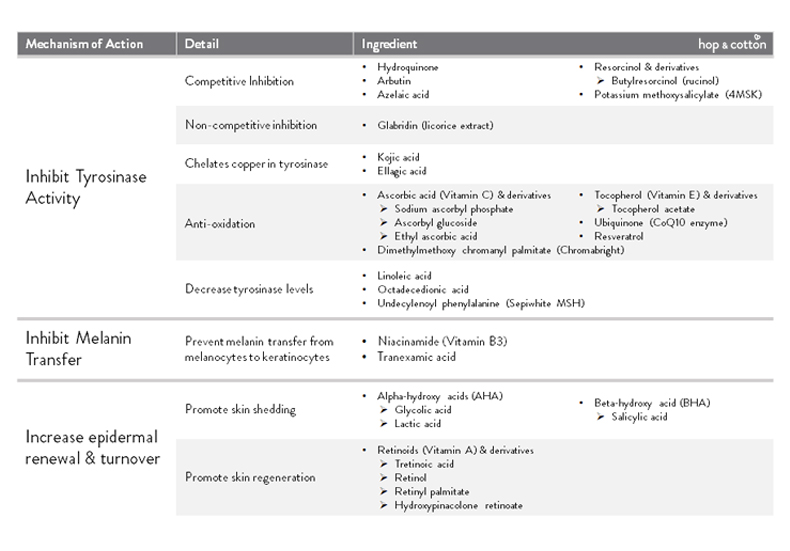 So which ingredient works best?

You might already have guessed that the most effective way to reduce hyperpigmentation is not by using a single ingredient but a combination of them, interrupting all three parts of the melanin formation pathway described above.

The more potent the lightening active, the more likely it is to cause skin irritation. Thus, it’s not always a good idea to go for the most concentrated lightening product as there is a fine balance between maximising lightening efficacy and minimising skin reactivity.

Given that UV exposure is the main factor for triggering hyperpigmentation and that many lightening actives make the skin more susceptible to sun damage, the importance of broad-spectrum sun protection cannot be overstated.

Fading hyperpigmentation is no small feat due to the complexity of the pigment formation process. The best products use a variety of actives that disrupt this process at multiple stages.

However, the effects of topical products can be limiting. This happens when genetic factors are involved (e.g melasma) or where the excess melanin is located deep in the epidermis (e.g. post inflammatory hyperpigmentation). In such cases, the most significant result is achieved when accompanied by more intense treatments such as lasers.

Any cookies that may not be particularly necessary for the website to function and is used specifically to collect user personal data via analytics, ads, other embedded contents are termed as non-necessary cookies. It is mandatory to procure user consent prior to running these cookies on your website.